Now many readers would like to know – what could be done? If at all, about them being a highly sensitive person with great personal problems? Or about their sibling who is like that and therefore is heading towards a difficult course of life.
Well, what H. S.P (highly sensitive person) needs is a savior and a redeemer, and in that they can only lean on themselves, which means that they have no choice but to become a warrior that goes out into the world to defend their soul and save themselves from their personal problems. To put a barrier between them and the coarseness and the rudeness which are threatening to penetrate inside. But it does not mean that this should come on the account of the loyalty to their fines, but it does mean that they have to live in duality: from one hand to embrace their soul and to draw from it rejuvenation, power and identity and from the other end to cultivate in them a middle age knight that goes out to defend the captive princess, or to use another analogy – to become a samurai warrior   that is going to defend his shogun.  But how is it possible to live in duality? Well the duality reminds us a roman figure: the double faced Janus
Janus 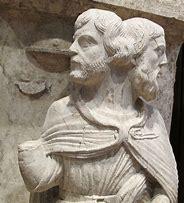 One side is turning inside towards the soul and the other side is turned outside towards society, towards the world. To live in one world inside and act in another world outside. And only if they succeed in doing that they can survive and thus allow their fragile soul an inner space.
And here find a paradox; exactly the gentle and the highly sensitive, those who fall apart with almost every heavy load of coarseness or rudeness is falling on them, those that all of their being shakes with every hostility – are the ones that should become to a race of Nobel warriors, exactly them, especially them!
If they don’t want to become a wreck they must become warriors.
To be warriors who defend the holly of hollies: the sacred soul.
For them the soul is more real then what they perceive on the outside.
But –in order for them to be that warriors they have at first to know who they really are and be at peace with this knowing.

During our life we suffer from hits, difficulties, breakdowns, hardships, crisis and tragedies. And on a superficial look it might seem that almost everyone gets ‘their share’ (who is more…
Read more

Part one: On psychotherapy and psychiatry. Physical doctors are excellent professionals when it comes to treating physical injuries and some illness. But when it comes to soul injuries there is…
Read more
Undeveloped 35 mm, ISO 125/22°, black and white negative filmH.S.P. (highly sensitive person) is like a photographic film, there is a difference between a film (with which it is possible…
Read more

Part a. The soulWhat is written in part 1 is that for the gentle in the mind it is quite easy to collapse in front of the difficulties they meet…
Read more
The children of the soul are walking among us, composed from tissues of light and communicating by another language.   Their skin is so thin and permeable and vulnerable that almost…
Read more
Some people are born with an Excessive or extra – soul. This does not allow them to integrate within a system that asks people to repress their soul in order…
Read more