In communication there are levels, the lowest (is even not considered as real communication), is the level of idle chatter, just talk for talk sake, empty talk, (this is – like the base of a pyramid- most common). The highest level is dialogue, which is a real unification between both communicators, but also is a breaking point into another dimension – together.

What are the difference between a dialogue and the: ‘just a talk’?
Well, ‘Just talk’ is unordered, even chaotic, any association goes. Jumping from subject to subject (any subject) just not to fall into the dreaded silence…
And mostly no common ground, no common goal, the talk itself is the goal.
In a dialogue they are not separated, they meet in a being in between them, that both of them construct; they create together this magical entity in between, an affinity, in which they can meet, without it, each is locked in his own cell, calling his call, but the other does not get it, he is immersed within his own call.

If both allow the relational affinity to take place between them, they can experience a kind of revelation; a world and experiences that were not available in regular separated talk.

An affinity between two people in a dialogue, graphically: 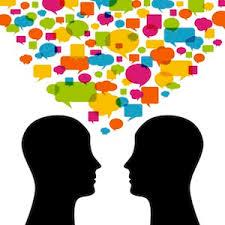 The affinity is the being which must be created between them if the dialogue is to be accomplished. They cannot communicate direct, they need a mediator, a neutral medium, through which, and in which, the dialogue can happen. The best and unfortunately most rare mediator, is humanity, human warmth, which should be the most natural being between two human beings, but in the absence of it what usually is present is alienation, so within the embracement which is being caused by it, we turn to any kind of talk, only to cover the gap of alienation and the lack of humanity.

In comparison to dialogue, ‘just talk’ has no mediator between the two, (in which both could meet), all they can find is only emptiness (alienation), which anchors each one in himself. By analogy it is like love; Without it, man and woman could be talking  – but stay locked in themselves, they communicate, but it has a low quality, low understanding, no depth, but if there is the being of love between them, their communicate can soar and has in it higher quality and depth.

So far it was to do with content, what about the style, the way in which the dialogue is being executed? Is its way different from the style of an ordinary talk?  The answer is yes. True dialogue does not go round and round, a real dialogue always has an aim, a ‘nut’ to crack. Thus its style and mode must be penetrating, direct, straight, orientated to the hidden point that needed to be cracked.  Thus, the most fitting figure graphically for it is that of an arrow:

And ordinary talk which is not a dialogue, has no direction towards an enigma that needs cracking – it looks like a circle that keeps repeating itself, going over again and again, no direction, no aim, no result, just more of the same, you heard it once you will hear the same again…

In a dialogue –the medium being created between both and by both, is a vehicle, it could travel anywhere, it doesn’t go around, it has a purpose, so it goes straight to the point that they wishes to crack and get the being out of it. A dialogue is always for a target, a true dialogue is more like a detective search, you don’t waste time, you go directly to the hidden mystery, you only use straight lines; yes or no, fits or no, belongs or no. if it doesn’t belong you take another line of approach.
But again, without the medium of affinity between them, they have no transport with which they can arrive to the dimension of the unknown, where the mysterious is hiding.

If there is an unresolved, hidden, conflicting, or paradoxical point – there is no chance to be able to discover or resolve it alone, for this we need two to create a dialogue, one person is not enough. Only this wondrous cooperation can execute the magic, and open the magic box and get the rabbit of truth out, only by a true dialogue.

The empty talk keep repeating itself, feeling safe in what is acceptable and known. While true dialogue must be breaking to new frontiers which are blocking the way to jewels and gems of truth hidden in the unknown. 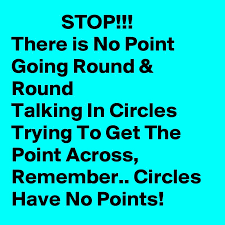 1. When we come to understand further the issue of hatred, as was written in part 1 – we usually perceive it as a deviant emotion, that it stems, grows…
Read more
There are two kinds of language in communications; formal and informal. The formal might be on any subject, usually not relating to what is going on at real time. While…
Read more
What is it about animals that fascinates us? We can watch them and be with them for hours, and if we work or live with them – we get connected…
Read more
Games develop your imagination, they encourage creativity, socially they are unifying, they are essential simulation towards the experience of reality, and from this aspect, games are very positive. But a…
Read more
“To be” is to be related”.Krishnamurti “A dialogue is a dance with the unknown.”David Bohm Part one: talk, conversation and dialog.All human being talk, but are they conversing?Talk is not…
Read more
If you speak (about something) to your partner in a conversation, and you get no relation to it, no response to what you just said – it means that what…
Read more